So at what point does an additional cook spoil the broth?

Through a number of engagements over the last week, the notion of diminishing returns has entered my work a couple of times.  On both occasions the idea was met with surprise by a number of colleagues.  So, I thought, if there are a handful of people that haven’t heard of the concept, there must be lots of people who are a due a refresher.  So the topic of the next BITS article was decided.

So what is the idea?  The concept is an economic one, a component of the A-Level economics syllabus in fact.  It basically states that the marginal (incremental) increase in output of a process will decrease as the amount of a single factor of production is increased.  This site isn’t called Economic Insights Team Solutions though, so lets look at this in the context of human factors.  If you have a manufacturing process that uses humans to make things, and you make more sales so need more output, you may add a person to your team.  Let’s say the addition of this person takes your output from 10 units a week to 20.  You then have more success so add another team member, however this time the output only increases to 28 units per week.  The law states that this reduction in marginal returns will continue as you add resources.  In fact a point can be reached where the addition of new resources can actually reduce your output.  So why is this? 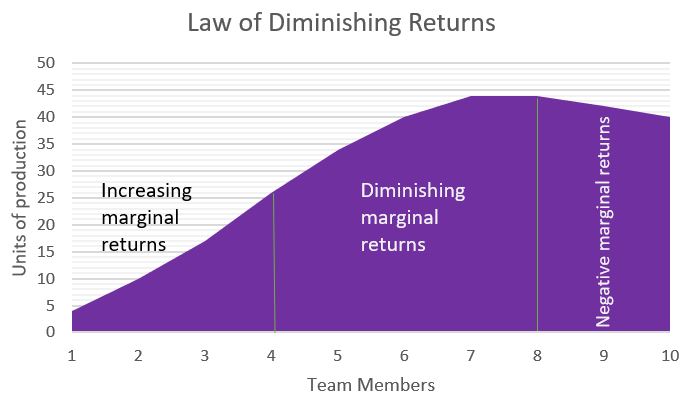 Again we will look at the human element here.  There are loads of practical reasons why this would occur.  For example, if your business is making wooden doors and you keep employing carpenters, at some point they will be competing for the capital equipment needed to make the doors.  They will get in each others’ way and compete for space to work and store the product they manufacture.  So the answer here is simple, grow your assets along with your team.

However, what if you aren’t competing for tools and equipment?  What if you have plenty of space because you planned for growth?  Will you still see this effect?  Research tells us you will.  Human behaviour is such that the larger a team gets the lower the marginal increase in productivity will be.  This is due to many human behavioural factors.  Here are a few examples to give you a flavour:

This list is not exhaustive, but is hopefully sufficient to convince you that this occurs naturally due to human behaviour.

So if this is an economic law that we see everywhere, what can we do to overcome it?  Surely we are powerless to change such a phenomenon?  Well, sadly, yes we are.  We cannot prevent the effect from occurring.  We can, however, design and manage our business to avoid it from impacting our output.  Have you ever heard of the two pizza rule made famous by Amazon?  Often attributed to Jeff Beloz, the idea is that if a meeting has too many attendees to be fed by two pizzas then it will not be productive.  Likewise, if a team cannot be fed by two pizzas then they will not be efficient.  So here we have our answer.  A few bullets to enable us to hammer the thought home.

We cannot prevent the law of diminishing returns from occurring, but if we are aware of its causes and impact we can make better decisions that minimise it’s effect on our production.