What we see is what we believe, it is perhaps our most powerful and trusted sense.  How many of you would consider bidding on a car on EBay with no photos?  Even if the write up was authenticated by Jeremy Clarkson himself, you would most probably want to see it first.

So what happens when our interpretation is wrong?   Well, in general, if it is based on what we have seen, we hold it as true, until proved otherwise. Take a look at this photo, you may have seen it before, if so, just bear with us. 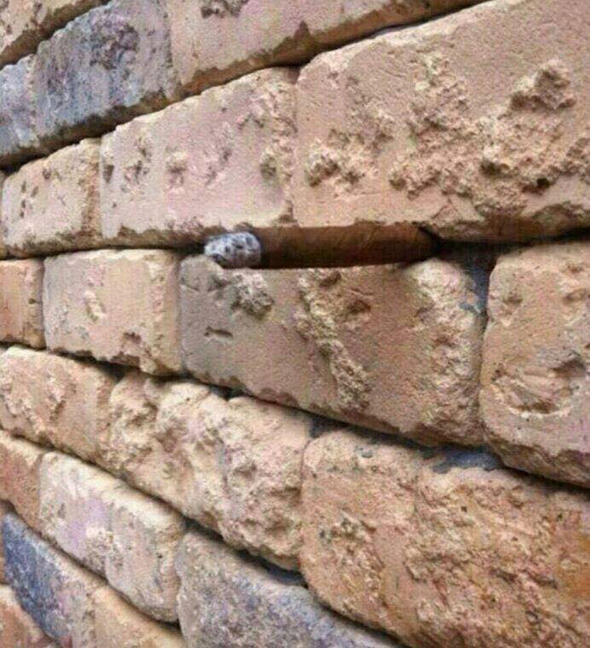 Just an ordinary brick wall.  Looks like there maybe a small stone or something in the shot.

If asked to comment on this wall, what would you say?  It is well weathered, brick colour is pale, it is not pointed?  It is pretty unremarkable. What if I tell you it is probably the most shared photograph of a wall since Michael Jackson’s famous album cover?  Now you might be interested.  Take a closer look, there is something there but you can’t quite put your finger on it.  Whatever it is, it surely isn’t so remarkable that this photo would become an internet sensation.

After you have read the next sentence the photo will never look the same again.

Wedged in the gap between the bricks, that unpointed gap, there is a partially smoked cigar with a length of burned ash on the end.   The cigar is end on and sticking out into space.

Now there is no guarantee that you didn’t spot this yourself, you might have noticed it immediately, however, most people seeing this image for the first time do not see the cigar.  Once you know it is there, you will always see it.  Once you have formed your new perception, it will remain in place until something comes along to update or replace it.

So if you are then given the additional information that the photo is in fact of a cake made for a publicity stunt at a construction conference and the bricks and cigar are carefully crafted icing; icing that has been painted, rendered and dusted in hours of painstaking work, your perception changes once more.

So, in the space of perhaps less than a minute, you have formed three perceptions of this image.  Three versions of the truth that when first formed appear to be the only version of the truth.  So if one simple image can have three different perceived versions in the mind of one person in such a short space of time, just think how many percetions exist of you and your beliefs and values in the workplace.  You know who you are, but there will be numerous versions of you in the minds of your team.  Furthermore, when you make an announcement, or deliver a new policy requirement or launch a new project, there will be multiple versions of how that information is interpreted too.  Further still, people’s perceptions can be manipulated by others, so your version of the facts can now become someone else’s message, but that message is perceived as yours.  For example, there is no cake in the photo above.  It is a wall with a cigar poking out.  I am sure the technology exists to make a cake that realistic, but it wasn’t used here.  It was simply made up, and some of you accepted it.

Why do we so often manage based on facts rather than perceptions?

So, if you hadn’t already understood it, you probably now accept that people’s perceptions vary.  Different people interpret things differently.  If this is the case, why do we so often manage based on facts rather than perceptions?

Take a look at the photo below.  This one is far more interesting than looking at a brick wall because it contains me! 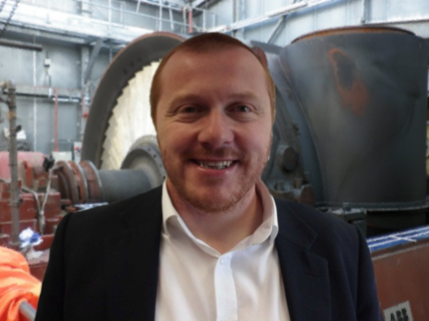 This photograph was taken in a beautifully air conditioned office.  I was standing in front of a white wall, having just come out of a meeting.  I was working for a power company at the time, the photo was taken to be uploaded to our HR software.  Which is a good idea by the way.  Everyone in the organisation had a photo uploaded to the employee database which was accessible by all.  So when you got a phone call or email and the name was unfamiliar, you could immediately look at a photo of that person to see who you were communicating with.  Putting a face to the name seems helpful in striking that initial relationship.  Well I wanted my photo to be a little different, I am not sure why, maybe because I don’t look that interesting on my own!  So being a bit of a whizz with Photoshop, I carefully cut out my image and pasted it onto a photograph from a maintenance outage.  Those who know power equipment will recognise a low pressure steam turbine in the background.  This photo was taken about 4 years prior to the photograph of me.  I applied a few filters to blur the image and added an oil painting effect.  I thought it would simply make a nice backdrop for my image, a power themed wallpaper.

So impressed was I with my efforts, I decided to use this image as my mugshot in the regular health and safety newsletter.  On the front page of the newsletter was typically an article written by me, it would usually relate a recent event in the news, industry or on plant to best practice in accident reduction.  The newsletter was issued, and within twelve hours I received an email from a concerned employee.  They were concerned and surprised at the fact that I would use a photograph of me in the steam turbine enclosure wearing a suit rather than the correct PPE.  After being pleasantly reminded that some people actually read our newsletter, I sent the person an email assuring them that I have never been into the enclosure in my suit and the image was in fact a Photoshop creation.

I wasn’t overly concerned as it was clear to me that the image was a fabrication.   I was standing in the office, the steam turbine had been added later.  Many people use these sort of images to connect them to their industry.  Everything was fine.  Then I sent the next newsletter.  This time I got several emails from health and safety advisors at other sites, engineers, global managers and one from the VP of my function. Each message said the same thing, ‘great article, surprised at the photo, you aren’t wearing the correct PPE’.  Now, I could have sent each person an email explaining the situation.  I could have relied on the facts that I know to be true.  I have never been in the enclosure without my PPE so I always set the right example.  However, do I set the right example?  The perception from many people worldwide was now that I don’t set the right example.  Do I accept the facts or the perception?  Well, of course, I bow to the perception of the truth.  I changed my photo and you can guess the subject of the newsletter article that followed.

I now always manage to perceptions and never assume that my version of the truth is the one held by everyone.

For clarity, I am big on leading by example, in fact I am bigger than big.  I am bigger than the largest superlative ever that has been on an eating binge and not been to the gym all year.  It is one of my main principals.  Even the chairman of the bank that finances the company that owns most of the shares in our business wears full PPE if they want to set foot on my site.  If the shoes don’t fit, we send out for a different size.  There are no exceptions on my site.  Yet, here I managed to send the exact opposite message.  A pretty powerful lesson was learned by me that day.  I now always manage to perceptions and never assume that my version of the truth is the one held by everyone.

Would you like a few bullets on this subject?  Go on then….. 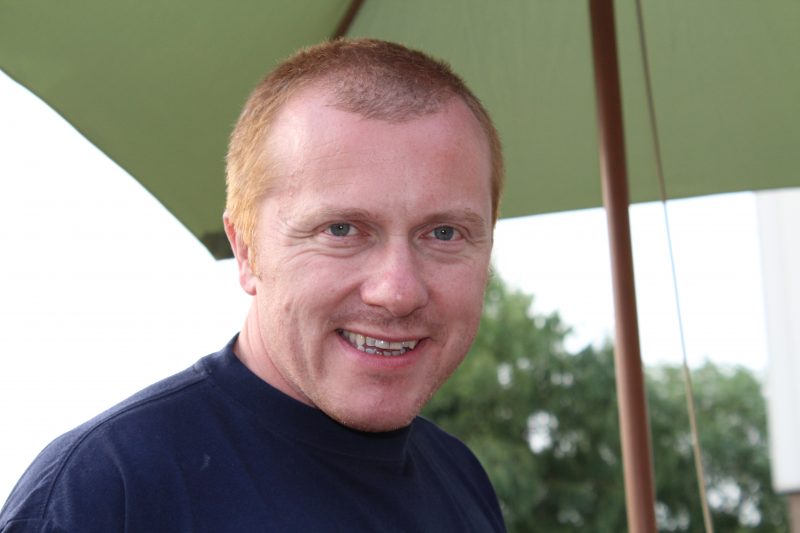 I replaced my photo with this one.

This was taken at a team family day.  The team and their families had got together for a celebration.  We had a family sports day, the sun was shining, the barbecue was yummy and I had laid on an open bar.  I am wearing the correct clothing for my surroundings and I am smiling because I am happy that work life and family life is coming together and everyone is enjoying themselves.  Hopefully this time the perception equals reality!