Maybe I decided to be bad at ten pin bowling.

Ask any celebrity about their road to success and they will invariably tell you that they had a vision.  Not a premonition, a vision of the success they craved, that they created in their mind.  They typically attribute a good deal of their success to maintaining this vision.  This is not to say they didn’t have to work hard, of course they did.  Many of them talk of studio flats, eating tins of cold beans and performing to audiences in single figures.  The vision helps focus this hard work and motivate them through the tough times.

As a vision doesn’t cost us anything, shouldn’t we all have one?

Maybe you do, or maybe you think you do.  Let’s explore the difference between a vision and a target.  A vision is a tangeable image of what you want things to look like.  It is based on your real life experiences to date and how they have shaped what you want your life to become.  While you visualise success a target is just a marker of achieving success.  Having just a target in mind won’t help you get there.  Let’s take an example.  Geoff is opening a restaurant in London.  He sets a target of achieving £5,000,000 EBITDA in three years.  This is in no way a vision to shape his path to success.  The only thing we can visualise here is seven digits on a P&L statement.  It is unlikely that Geoff has prior experience of a seven digit EBITDA so this is not a tangiable goal.

Now let’s consider a vision for Geoff.  Geoff wants his restaurant to be friendly, he wants every customer to be happy, not just satisfied, but happy.  He wants a restaurant where the food is always fresh and of the highest quality.  He wants to help achieve this by ensuring that every member of his team has the same desire for quality and customer happiness.  In his vision, his staff share in his success, they are as invested in the success of his restaurant as he is.  His restaurant is going to be the talk of the town.  So when he opens restaurants two and three they will be immediate successes.  This will enable him to hit his profit target in three years.

As you read about Geoff’s initial target, what image formed in your head?  Maybe a piece of paper with some ink on it.  As you read Geoff’s vision, what pictures formed?  Maybe some smiling customers, a plate of food, maybe some seared scallops with bacon, rocket leaves and a balsamic dressing.  You probably visualised some serving staff, in clean uniforms, working efficiently whilst being happy.  Then you might have visualised a building, the front of a restaurant as Geoff visualised expansion.  Maybe there were carpenters working or delivery drivers arriving.   Whatever pictures your mind’s eye created, you could see what Geoff’s business might look like.  And this is the difference between a target and a vision.  The vision can literally be played out like a movie script.  Furthermore, even if your target is a long time away, your vision gives you feedback that you are on the right track to success and helps you make the right decisions as you move forward.

So I started by saying something about ten pin bowling, then launched into restaurants.  Why is that?  Well it’s ten past one and I haven’t had breakfast or lunch yet!  Also, I want to illustrate that visualisation isn’t just about life goals and big picture stuff. 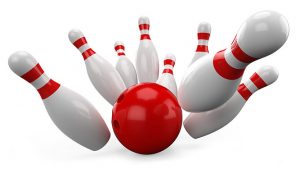 I don’t mind telling you that I am pretty rubbish at ten pin bowling.  Yet, for one reason or another I find myself at the bowling lanes with a degree of regularity.  Usually a fundraising event, where I come along for a  bit of team building and to pick up the tab at the end of the night.  On one such night, I was languishing in the bottom quartile of scores as is quite normal.  I took a break from the game to visit the toilet (I had after all openened up a bar tab).  On leaving the toilet, as the door closed behind me, a thought literally leapt into my head.  It is as clear now as it was then.  It went like this, ‘if it is my turn when I get back to the lane, which I knew it would be, I will not talk to anyone.  I will just walk a continuous, purposeful walk without breaking my stride.  I will pick up an extra large green ball from the rack as I pass.  Without pause I will walk straight up to the line, launch the ball straight down the middle of the lane and get a strike.’  This is exactly what I did.  After bowling fives, sixes and gutterballs all night, I got a strike.  So why was this?  Well I visualised myself do it.  Although my thought is recounted in words, it was formed as an image, or moreover footage of me scoring that strike.  Every detail was visualised in advance and it played out as planned.  So this brought about a few thoughts.  Firstly, I have the technical and motor skills required to score a strike.  Secondly I hadn’t been putting them to good use all night.  Thirdly, I was capable of influencing my personal performance.  So maybe I just decided to be bad at ten pin bowling until this point?  In a sense, when I wanted maximum performance I just had to call it up, with a vision.

So, relate this to  your working life.  Next time you have a critical negotiation or a big presentation, put in the usual legwork as you would.  Determine your markers, prioritise your bargaining chips, prepare your slides, setup those infuriating animations.  This is the hard work bit that we can never escape.  When this is all set, visualise you in action.  Decide what you will look like on the day.  Smart clothes, immaculate hair, clean shoes.  Will you be standing as you talk?  If seated, where will you sit in relation to others?  How will your voice sound, strong and confident?  Will there be an introduction, a hand shake, how will that look?  Visualise all this in advance.  Optimise every element and decide which behaviours will best serve your goals.  Once you have this imagery mapped out, step away from the first person.  Change your view point, look at yourself from the corner of the room.  Watch yourself in action.  Is it impressive?  It should be.  Now why wouldn’t you want that impressive person to perform your work for you?  Of course you want them to do it.  And that impressive person is within you.  Don’t let any events on the day deviate you away from being that high performer.

Is the answer in the stars?

You will be relieved to hear that I will fall short of promoting cosmic ordering.  I do have a beard, but I am no Noel Edmonds.  However, as the great beard himself has demonstrated, by ordering success from the stars, you can actually see results.  Now there is no evidence I have found that convinces me that celestial bodies dictate our futures.  However, there is science that has been long accepted that tells us how this might work. 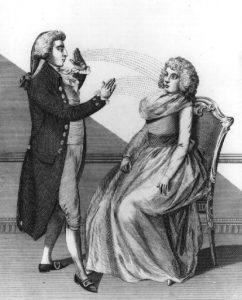 Franz Mesmer was an eighteenth and nineteenth century physician. He also had an interest in astronomy.  He postulated that if he could harness the power of other planets through animal magnetism and direct it toward his patients, they would find the strength to get well.  He observed that by going through a ritual involving hand movements and sounds, his patients appeared to transcend to another state where they were capable of performing tasks hitherto impossible for the sick patient.  He also observed that he was able to control this wonderful power.  This patient state become known as Mesmerised.  Of course, we now look back at his work and recognise what he achieved as an early form of hypnosis.  The power he harnessed was not from the stars, but from within the person themselves.  Likewise, when we engage in cosmic ordering, we are not receiving gifts from the stars, but unlocking our true potential by visualising success.

The untapped power we have within ourselves is immense, it would be madness to not dip into from time to time.

So when you visualise a task outcome and push yourself to deliver your maximum potential for this task, consider yourself to be operating in turbo mode.  Like me with my bowling, you can’t operate in turbo mode all the time.  You will run out of fuel.  Indeed, after my strike, I got a spare, then I returned to my normal scoring for the rest of the evening.  Why? Well I was there to build relationships within my team and raise money for charity, winning was never part of my vision.  However, if you operate in Turbo mode when it matters, you will soon find that tasks that once required supreme personal effort and vision become easily achievable when operating at normal power.  So of course this means that tasks that were once unattainable can now be achieved through the application of visualisation.  You have improved your overall performance and taken a few certain steps towards achieving your life vision.

4 thoughts on “A Friday Thought on Personal Performance”