I just don’t want to talk about Jesus today.

A few days ago, at lunchtime I popped into town to stretch my legs and browse the local shops.  After a good walk around and the realisation I don’t actually do browsing, I decided to walk back home and get back to work.  As I walked towards the road crossing, I was approached by a young man dressed in a suit and sporting a badge which said “The Church of Jesus Christ of Latter Day Saints”.  Now, I am happy to say hello to anyone, I exchange pleasantries with complete strangers and talk about the weather.  This man, simply walked up to me, stood in front of me as I was walking and asked what age I wanted to be.  No introduction, no greeting, just that “What age would you most want to be”.  Wishing to be polite, I physically navigated my way around him and said “The age I am now”.  I continued walking, clearly indicating that this was a line of conversation that I wasn’t interested in and I wanted to get back to work.  He walked alongside me and said “What 25?”.  I chuckled and said I wasn’t 25, and stepped onto the crossing.  I thought he would break off at this point rather than cross the road.  Instead he said, “How old do you think Jesus is?”.  Feeling a little annoyed at this point I flippantly responded with “In years or isotope half lives?”.  He then stepped in front of me on the crossing and blocked my progress across the road.  Those who know me, know that I don’t get angry often, but this riled me a little.  He had literally blocked me in my path, in the middle of the road, with traffic stopped to each side of us.  In any other scenario this would be considered aggressive and seen as an attempt to obtain something with menaces.  I snapped as far as I allow myself to snap, and simply told him that I didn’t want to talk about Jesus today and would like to get on with my business.  I walked away, leaving him standing in the middle of the road looking incredulous.  He remained there somewhat dumbstruck until the frustrated motorists beeped to remind him of their presence and he walked back to his original starting point.

I have met these guys before, and know they are simply trying to increase their number by persuading people to share in their faith.  My minor burst of anger dissipated almost immediately and I started to think about the behaviour I had just been privy to.  As a behavioural scientist I know that behaviour is heavily influenced by consequence.  The consequence of a behaviour influences whether we adopt that behaviour in the future.  So this aggressive, bullying approach which simply served to annoy me, must sometimes work.  Somewhat different to myself, other people must feel duty bound to talk to this man when he physically prevents them going about their business.  Maybe out of a sense of politeness or maybe a desire to avoid any sort of confrontation, some people must actually go along with this line of conversation and maybe agree to attend a local meeting or purchase a newsletter.  As I walked home, I concluded that this must be the case, otherwise why would he behave this way.

You get more with the carrot than the stick.

So this got me thinking about the workplace.  Here at BITS we do our own brand of preaching.  We advise people that behaviour is reciprocal, people respond in a similar manner to that which you present to them.  To this end we always advise not to use aggression to get what you want.  Bullying management styles don’t work.  We expound that a collaborative, inclusive and polite approach rooted in respect is far more effective.  You get more with the carrot than the stick.  Yet here I see a demonstration of someone using bullying, aggressive tactics, and I had concluded, with some evident success.  He had a fail with me, but must find this approach successful.  So being aggressive, making people feel awkward and presenting them with a negative alternative must work in obtaining the behaviour you want.

Before we get carried away here, we may not be Nobel prize candidates here at BITS but we aren’t stupid.  We are not about to publish an article that suggests everything we have been saying has been wrong all along!  However, it is true that you can get what you want from your team by being aggressive, threatening and dictatorial.  Most people will do what they are told if their boss has told them to do it.  If their boss shouts when they haven’t done something properly, they will probably try to do it better next time in order to avoid getting shouted at.  We have, after all, introduced a consequence of getting it wrong which people will try to avoid.  This is why some managers behave in this way.  They see that it gives them results.

Now lets explore how this might play out if you adopt this style.  Let’s do this in the context of employee engagement.  Employees who are managed in a collaborative style where they are asked rather than told, encouraged rather than disciplined, rewarded rather than penalised, tend to be more engaged.  Engaged employees are self motivated, they are also self managed, they tend to know what needs to be done and get on and do it.  They typically only trouble their leader for occasional validation and support.  This is for most people, the sort of team member you want.  Employees who work for a boss who tells them what to do and threatens reprimands if performance isn’t optimum and rarely asks the opinion of their team, tend to be disengaged.  A disengaged employee tends to be low on motivation, they wait for instruction before doing anything and tend to talk negatively to their colleagues about the organisation.  These employees can still have a very high delivery rate.  If actively managed, the aggressive boss can get a high work rate out of these people, by providing regular instruction and regular reprimands for poor performance you can get these people to deliver what you want.  So why not do that? 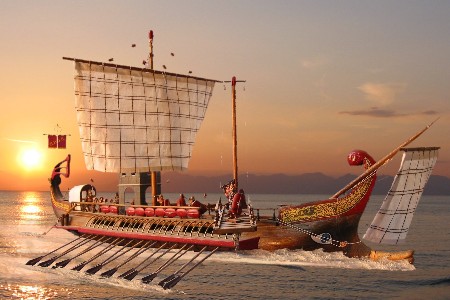 Managing a disengaged team member in this fashion is exhausting.  Imagine the old galley ships.  You have, typically slaves, below deck propelling the ship by rowing.  Disengaged rowers require a driver to permanently shout at them and whip them when they slow down.  Is this the sort of leader you want to be?  Surely, an engaged crew who share in the benefits of reaching the destination will row because they want to.  This allows the leader to sit on deck sipping a nice Sancerre and making plans for the mission.  A progressive, collaborative leader who focuses on keeping their team engaged has a similar work load to the autocratic leader who gives permanent instruction and feedback.  However, that work is far more rewarding, and unlike the shouty leader, this work is focussed on improving the business rather than just maintaining the status quo.

In addition to wearing yourself out by working on negative subject matter and constantly trying to run every aspect of the business, you are also wearing your team out.  Take a loo 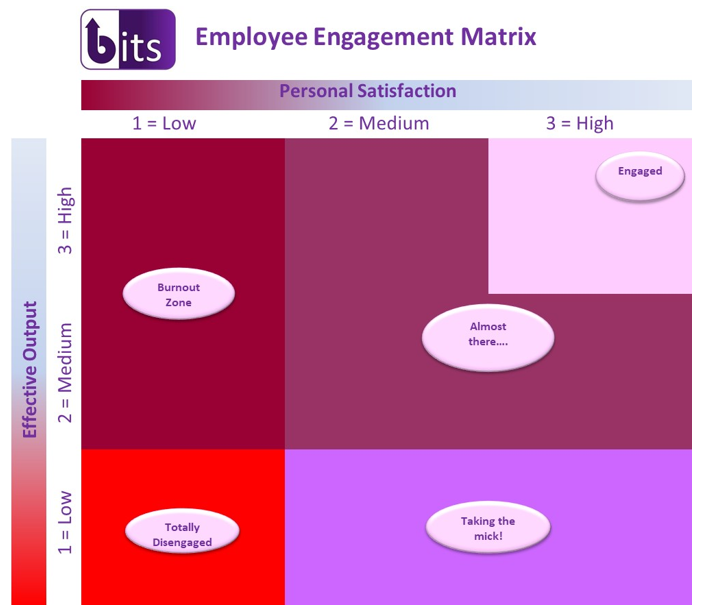 k at the diagram on Employee Engagement.  This matrix simply plots employee satisfaction against effective output.  Groups have been categorised to make discussion easier.  In recent surveys of multinational companies, between 40-60% of workers were found to be in the Burnout Zone, Totally Disengaged and Taking the Mick categories.  This means that half the workforce are either not delivering or on the brink of burning themselves out because they are working hard to be unhappy.  So if you have opted to use the dictatorial, shouting style of management to get results, you are placing more of your team into the burnout zone.  Life in the burnout zone is not sustainable.  You can’t be in high delivery mode and unsatisfied long term.  You will end up on long term sick leave if you try.  The most common outcome for those in the burnout zone is either moving on to a new employer or moving down the matrix to totally disengaged.  Either of these means more work for you as a manager, much more work.  So environments where the leader employs this sort of style are typified by high turnover and unhappy people.

As a manager, why opt for this style of leadership?  It is more work, less productive and delivers less results which are not sustainable.  It maybe that people who lead in this style do not have sufficient knowledge or understanding to lead any other way.  So many employee engagement programs focus on the team and tend to ignore the leaders.  As any HR professional will tell you, people don’t leave a company they leave their boss.  It is the leader of a team that sets the style and determines where people live in the engagement matrix.  If you are a leader of an unhappy team and people keep leaving, I am really sorry to tell you but it is you who holds the answer to this problem.  Take a look at your style, question your methods and determine a plan for change.  The only way to sustained team performance is to establish a team of engaged workers.

If your way of getting things done is to “shout, shout and shout again!”, maybe it is time to consider if you would like to be the whip wielding supervisor below deck or the Sancerre sipping manager sitting in the sun making plans.  If you are not prepared to change, I can introduce you to a young man in a suit who would love to get you on board for his recruitment drive!