A key task for you as a manager, is to ensure that your team see themselves as leaders and realise the power that they have. 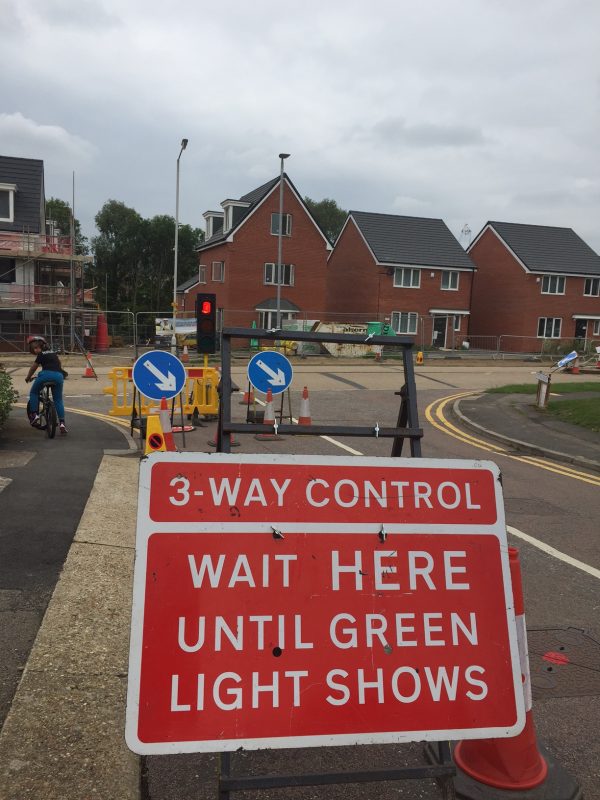 We have published a few articles lately on how our failure to maintain high standards can negatively influence the behaviour of others.  Check out our posts on broken windows and lawlessness.

Today we are looking at how powerful leadership behaviours can be, and how this power is possessed by every member of our team.

Let’s start with an example.  I live on a typical suburban commuter estate.  Lots of detached family homes, mostly inhabited by people who take the train into London everyday.  As such, it is quite a popular location and demand outstrips housing stock.  Motivated by this a developer has opted to build some houses on the thin strip of land between our road and the local flood defence.  Due to the very narrow nature of the plot, once the first few houses were built, the construction vehicles could no longer cross the site as they can’t pass the houses.  So to move things around the site, the vehicles have to exit the site onto the public highway and re-enter the site further down the road.

The other day, in order to hook up to some services the construction workers have excavated the road.  To facilitate this they have established three way traffic controls to allow the continued use of the road with only one lane available.  The traffic lights simply hold the traffic at one end of the excavation while traffic in the other direction drives down the single lane.  The excavation is about 200 metres in length.  Alongside the excavation are two of the site entrances to the new housing estate.

In order to move site vehicles from one end of the site to the other, the construction workers regularly drive along the stretch of road between the traffic lights.  However, they do this whenever the road looks clear, regardless of the colour of the traffic lights.  So often they drive along the road, whilst car drivers are kept waiting at the red light.  This is where the behavioural angle comes in.

I was waiting at the lights behind another car, the lights on red.  Despite the red light, after a few moments of waiting, the car in front just pulled around the light and drove through the road works.  They couldn’t have missed the red light because they actually stopped at it and waited a while before driving through.

I have since seen about ten drivers do the same thing, including one learner driver on a lesson!  With such a well established control as a red light, how could so many people ignore the lights?

Yesterday, four or five cars drove though the red light at their end and encountered me driving in the opposite direction having passed through my green light.  A group of construction workers nearby threw their arms in the air in disbelief at this impasse.  However, I would argue that the situation has arisen as a result of their behaviour, not just the drivers involved.

Not wishing to hold up progress the construction workers have fallen into the habit of driving against the flow established by the lights so long as the road isn’t busy.  Sometimes when it is quite busy, they post a man in hi-vis to stop the traffic by standing in the road, even though there is a green light.

Having observed this behaviour from the construction workers, the locals have decided that the lights don’t really matter, and can be ignored if the route looks clear.  However, the construction workers probably feel that their behaviour is fine.  Before the lights were there, they would often stop and direct traffic to allow their vehicles to exit and enter the site.  The installation of the lights doesn’t change this.  I am sure if I suggested to them that they are safety leaders for the project, they would respond by directing me to the boss.  However, for the local drivers, the men in hi-vis are the safety leaders.  They are the owners of the work activity and therefore are visibly accountable for setting the rules.  In this way, the construction workers have the power to influence the behaviour of the local residents.

So who are the leaders in your workplace?  I’d like to suggest that every single member of your team is a member of your safety leadership team.  A key task for you as a manager, is to ensure that your team see themselves as leaders and realise the power that they have.

The highest standard of behaviour you can expect from a team is the lowest standard you demonstrate to them.

I first learned of my safety leadership power many years ago.  I was working as a Materials Controller at a power station.  We were having a major outage where we perform major maintenance on the turbines and associated plant. My job was to ensure the right materials were available at the right time to support the works.  However, the vast majority of materials were supplied under a long term support agreement.  They were ordered, checked and issued by someone other than me.  So, in order to ensure the quality of the process, I decided to witness the unpacking and checking of every case.

I was standing in a large tent that we had set up as a temporary warehouse to receive these materials.  I was a supervisor at the time, in no way part of the plant management team, a sort of middle ranking role.  I was standing with the Site Manager from the contract company performing the works.  He was responsible for a team of 400 workers, all matters of safety, quality, schedule and budget for this £40,000,000 project.  We were accompanied by a handful of contractors who were there to open the crates and check off the contents.  One of them asked the Site Manager if they were required to wear hard hats in the tent.  The manager said nothing, he simply pointed at me.  I had already removed my hat.  As one, all the contractors removed their hats.  At this point I realised the power I had to be a positive influence for safe behaviour on the site.  As the client, or representative of the site owners, I provided the lead for safety behaviour.  This was regardless of seniority.  Soon after this revelation, I also reached the conclusion that as much as I could be a positive influence for safety, I could also negatively impact behaviour should I behave unsafely.  It is in this way, we are all safety leaders at our place of work, regardless of rank or function.

As a leader it is both your job to set a good example and to ensure your team are doing the same thing.  The highest standard of behaviour you can expect from a team is the lowest standard that you demonstrate to them.  If you have a rule that no one can enter your plant areas without overalls, and then as the site manager you hear a loud noise and rush onto site in your business suit to see what is afoot, you have appended to the rule “unless something out-of-the-ordinary is happening”.

Call every team member a leader, they won’t demand a pay rise!

Make sure your team are aware of their power, and encourage them to use it to promote safe behaviour.  Furthermore, establish a set of leadership behaviours that everyone on your site commits to uphold 100% of the time.  If you haven’t already, get your team together as a group.  Discuss what behaviours are good examples of safe behaviour on your site.  Discuss any situations where people may break the odd rule or cut a corner.  After the discussion, agree a set of behaviours that originate from the team.  These are to be behaviours that every single team member makes a commitment to demonstrate at all times.  Behaviours that will positively influence others working on the site.  Typical examples are:

They will also agree that if anyone is witnessed to be behaving in a manner contrary to this, they will be approached and challenged, regardless of rank.  As the leader of the team, it is your role to make this commitment, and should you have a moment of weakness, you must accept the observation and challenge from anyone in your team.

Pump up the power!

This process, however simple, can have a dramatic impact on respect and accountability in your team.  Through this simple action you will enable your team to feel empowered whilst taking responsibility for both their actions and the actions of others who work at your place of business.

Most of your team do not yet know the power they posses to make your site a safer place to be.  It is your job to help them discover this.