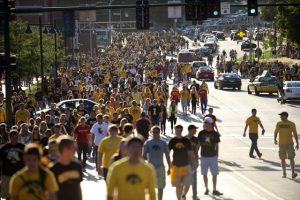 They played awful today, but I think we’re still going to win the cup!

Have you ever noticed how supporters walking from a football match associate or dissociate themselves from their team?  Maybe you haven’t, they probably don’t even notice them doing it themselves, as it is totally natural for all of us.  If you ask a supporter what they think of the game when their team won.  They generally say things like “We smashed it!”, “We played a great game!”.  However, talk to supporters of the losing team and you might hear “They deserved to lose.”  “They played awful today” or “They were unlucky but the best team won”.

This phenomenon has been demonstrated in a number of experiments.  The most well known being those of Robert Cialdini.  Through controlled observation he noted that students were significantly more likely to turn up to lectures wearing the university team colours, if the university team had won over the weekend.  Now, you might be thinking this is obvious, we all do that.  Well no one ever said that some human behaviour is not obvious.  However, just because a behavioural trait is obvious, it doesn’t mean that awareness of this trait is not useful to us.

So associating ourselves with success is referred to as BIRGing, basking in reflective glory. If you are interested in learning how you can use this at work read on……..

There is more to this obvious behaviour than meets the eye.

So you probably already want your team at work to share in your successes and be proud of the company they work for.  That has to be good surely.  So how do we get this?

Firstly, there needs to be a sense of involvement for BIRGing to occur.  Let’s take the Cialdini example.  If a student of that university has never shown interest in the football team, they are unlikely to come to lectures in a football shirt if the team wins a game.  They have no involvement, and would get no reflected glory from this.  However, what if the football team was the underdog at the start of the season, but was now in the cup final with a chance of winning?  Now you might find a few more people parting with some money for a shirt.  Just as the nation buys national flags when their country gets through to a major cup.  An increase in visibility of the team and its performance has increased the number of people with a sense of involvement.

This is one of the reasons why KPIs and celebrating successes are important, a bit of competition between business units or between companies helps people to BIRG.  You probably already report some KPIs.  However, here’s a few quick tips on how to make them work for you. 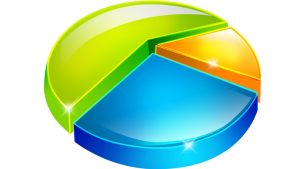 So we have yet to advance much beyond obvious when it comes to BIRGing.  I think most of us know that a bit of healthy competition helps stimulate some involvement and ownership of business metrics.  However, it doesn’t hurt to refresh and review our use of this.

So let’s consider that revision.  Time to move on to level 2 of BIRGing.

We are complicated creatures, often to the extent that we confuse ourselves by our own behaviour.

You have a best friend.  Maybe you grew up together, went through school and teenage years together.  You would do anything for each other.  You have been there for each other when relatives have died, you have celebrated successes together and cried together.  With a friendship like this, you would always help your friend to do well wouldn’t you?  Wouldn’t you? 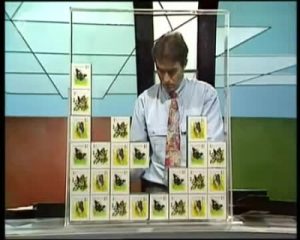 A rather clever study was devised to explore this area.  Participants were selected from the street, pairs of friends were chosen to take part in the study.  A situation was created whereby participants were required to perform a manual dexterity task.  Of the pairs of friends, one would perform the task, alongside a stranger, against whom they were competing.  The other would observe behind a two way mirror.  The observing friend was able to anonymously help either their friend or the stranger.  The friend would never find out who had been helped.  So you might expect friends to help each other.  In fact the opposite was found.  People were significantly more likely to help strangers than their own friends.  Why would this be the case?

One important point here is that the observers believed that they would compete against a stranger once they had finished observing.

We have got our heads around BIRGing and CORFing, so people want to associate with success and dissociate with failure.  So you associate with your friend and want them to be successful, right?  Not always it seems.  In this scenario, the observer saw an opportunity to appear more successful than their friend, with whom they associate.  So in it’s simplest terms, beating your friend in a competition is more rewarding than beating a stranger, especially if you already feel that you have no association with that stranger e.g. they are a different social class.

Just to complicate things further.  When the observer is in an environment with people they do not associate with and their friend is criticised for not winning the task, they then defend their friend.

So let’s consider a social hypothetical example.  You have a circle of friends, one of whom is a runner for the county athletics team.  In your circle of friends you trash talk the runner, joke about how slow they are, suggest you run faster when running for a bus etc.  However, when introduced to a group of strangers in a social setting, you will boast about your friend the runner.

What are we seeing here?  What we are seeing is that human’s naturally want to be the best in the group with which they associate, and secondly they want this group to be better than any other group they encounter.  We are also learning that the more successful their group, the more they wish to be associated with the group.  Furthermore, studies by Cialdini and others have demonstrated that when this association is strong, people remain proud of their association with the group even when the group suffers failure.  In fact, their association gets stronger in some cases following failure.

So lets convert this to work parlance.  By nature, an employee wants to be the best in their team, they want their team to be the best team, they will defend their team and remain loyal to their team when things aren’t going too well.  Well this sounds great, ‘give me a piece of that!’ I hear you say.  The key to unlocking this natural human trait is association.  Your employees need to feel part of the team, part of the company’s success.  To illustrate this I will use two examples from my past.  As always, the names have been changed to protect the innocent!

By nature our employees will behave how we would want them to.  So how do we encourage this?  More importantly what kind of things prevent this? 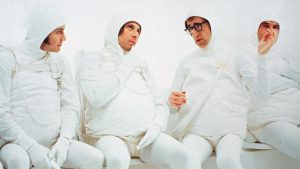 I used to work in a food processing factory.  Let’s call it UK Foods.  We didn’t have our own overalls, we would be issued with a random pair of overalls every 3 shifts based on our size.  We had a clocking on card.  We were required to clock on, in our overalls 5 minutes before our shift start time, because it took 5 minutes to walk from the clocking on scanner to our work machine.  This meant arriving for work well in advance of our start time because we were not allowed to wear our overalls outside of the factory perimeter for hygiene reasons.  If we failed to do all this, we would be penalised an hour’s pay.  If we had a query regarding our pay, we had to report to the wages office in our own time and quote our number.  We would be referred to by this number rather than our name.  Toilet breaks were only allowed during authorised break periods, during which we clocked out and back in.  The only financial information we were ever given about the company was how much product we had wasted and how much this had cost the company.  We had no idea whether UK Foods made money or not.  We had a rotating shift manager, so our line manager would change every week.  We worked on an annualised hours basis which had us contracted to work 6 days a week for 37 of the 52 weeks in the year.  This would mean working a Saturday or Sunday most weekends.  If we worked weekends we got paid the same as when we had a weekend off.  We were only told if we were required to work weekends on the Friday immediately before our weekend.  At one point UK Foods recognised that employees seemed demotivated.  They organised some team building, this involved two events, one in a five star hotel which included all managers and directors, the other on the work car park in the rain, which included everyone else.

This sounds pretty hellish right?  After a 2-10 shift a group of us would go to the pub for last orders.  Can you imagine in what terms we talked about UK Foods?  Were we proud to work for them?  We would complain about them to anyone who cared to listen.  We would bad mouth their product, standards, quality everything.  We would tell people which supermarket brands were made by UK Foods and which had the best ingredients.  To say we were disloyal would have been an understatement.  Very few employees displayed the benefits of BIRGing outlined earlier.

It will probably come as no surprise that the factory I once worked in is no longer there.  The company became so unprofitable that they were bought out by a competitor.  Let’s look at the competitor as our second example.

We will call them Patterson’s Foods.  Patterson’s was a family owned business.  They issued every employee with coveralls which featured both the company logo and the employees name.  They invited all employees to product tasting and development sessions, for which they got paid.  They requested employee feedback on equipment function, operational processes and product design.  Employees were paid a salary rather than per hour.  Team building events were totally inclusive for everyone.  They had a bonus scheme based on company profits and offered promotional opportunities throughout their business.  They offered their employees free product to take home and encouraged them to share this with their friends and family.

Patterson’s is now an international brand, you will see adverts for their products on a daily basis.  They are not a perfect employer by any measure, however, their workers are proud to say who they work for and will argue that their company is the best in the marketplace for their products.

By involving employees in the continuous improvement of your business and sharing your results and successes, you encourage them to feel a strong association with your business.  The stronger this association, the more dedicated and loyal they will be and the more BIRGing you will observe.

Look at the two examples above, which is closest to your organisation?  There is not one employee in your business who couldn’t improve results by delivering their maximum effort.  Your work is to ensure they feel involved and associate with your company, they will respond by BIRGing.