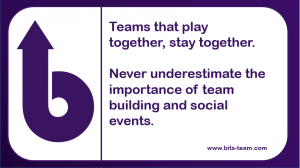 Teams that play together, stay together.  Never underestimate the importance of team building and social events.

So many leaders see team building and social events as a treat for their staff rather than an important component of improving team performance.  In actuality, providing opportunities for your team members to spend time together in a social setting, builds relationships in a way that few business activities can.  This is a brief post that focusses on one empirical example, however, read up on social psychology and research in this area.  There are decades of learning that help avoid pitfalls and wasted energy and expenditure.

Let’s look at a business example to illustrate this.

Martin and Phillip are managing a major project on a site owned by a large multi-national.  Philip is the overall project manager, Martin is the contract manager.  Between them they have selected a main contractor and negotiated a target price contract which drives early completion by allowing a gain share arrangement.  The agreement similarly ensures that the contractor shares the losses associated with an overrun.

Meanwhile, head office have decided that any variable cost mechanism carries too much risk and determined that all such projects will be contracted on a fixed price basis.  The target price was four million pounds.

The project overruns, the main contractor refuses to honour the fixed price arrangement and negotiates a settlement for the overrun of a further 1.2 million pounds.

Martin and Philip attribute the overrun and budget overspend to Nigel.  As such their feelings towards Nigel are less than positive and this effects their working relationship.  A post project night out is organised.  Martin decides to go along, as does Nigel.  Philip declines the offer, privately telling his friends that he doesn’t want to socialise after such a disappointing project.  Martin and Nigel have a few drinks together.  Martin realises that Nigel is a nice bloke who was just following a head office direct instruction.  Nigel privately confesses that he felt the target price deal was a good deal and would have cost less overall.

Martin and Nigel go on to have a great professional relationship and work together on other projects.  They eventually find themselves in senior management roles where they head teams with opposing agendas in pursuit of the same common goal.  They manage this potential conflict well and minimise risk whilst maximising performance.

Philip struggles to work with Nigel going forward.  He refuses to listen to Nigel’s point of view on anything.  He develops a mistrust of head-office in general believing that everyone there must be like Nigel.  He begins to earn a reputation of being obstructive and not being committed to corporate objectives.  While Martin gets promoted and delivers significant value to the business, Philip is eventually managed out of the business.

Now, not all the events that followed that night out can be ascribed to Philip not meeting Nigel socially.  However, just think how different their relationship would have been if they had had a few drinks together and talked about each others’ families and football teams.  Wouldn’t their working relationship have been a whole load more productive and positive?  They would of course have continued to attend social events together which would have introduced an additional dimension to their relationship.

Shortly before he left the company, Philip found himself at a company social event with Nigel.  They got on tremendously and ended the night in tears of laughter having thoroughly entertained each other all night!  Until this point, Philip had allowed that one business interaction to form his judgement of Nigel.

Social and team building events should be seen as a necessary part of business, not just as a treat or recognition of good performance.

Hopefully this story illustrates how valuable attending company social events can be.  As leaders we should organise regular social events of varying types to suit all preferences.  Importantly, we should actively encourage all team members to attend.  As such, social and team building events should be seen as a necessary part of business, not just as a treat or recognition of good performance.  However, one caveat here, there is a danger of distinct groups forming, those who socialise and those who choose not to.  The ‘social’ group may be perceived as having an unfair advantage and access to the ear of management.  This is why it is so important to manage this aspect of business just like you manage other aspects of day-to-day work.  Here are a few tips on maximising value from team-building events. 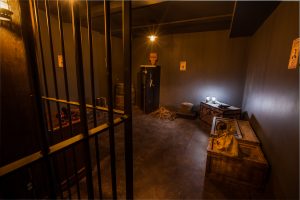 Consult – Ask the team what sort of events they like to attend.  Don’t form committees or run surveys, just ask questions over lunch or at the end of a meeting.

Vary things up a little – Not everyone likes drinking at the bar or sitting down for a formal meal.  Try different sorts of events, go to a football match, organise a fun run, try a locked room or obstacle course race.

Dedicate business hours to this activity – Some people have busy family lives and outside interests.  They may not be prepared to sacrifice their personal time to attend such events.  Schedule some events during work time to enable everyone to attend.  If you have shift workers, look at the rota and make sure everyone gets an equal opportunity to attend.

Cast that net – For most businesses the cost of holding an event is a very small proportion of the operating budget.  Don’t be afraid to invite people from other locations and don’t forget your regional head office!  Helping people who rarely meet each other to spend time together socially can really move their relationship along.  It is difficult to build a relationship with someone who is only ever a voice on the phone or a message in your mailbox.

Mix it up – Include everyone in social events.  Never have one event for management and another for the rest of the team.  Such events have a negative impact on performance and feed natural divisions between managers and subordinates.  As much as possible, and as logistical considerations allow, avoid separating departments for such events.

Join in – Above all, if you have organised an event make sure you attend yourself.  Organising social events as a leader and then not attending them yourself sends out a strong message and not a good one!  Take the opportunity to show your team that you are human, this way they will find you more accessible when they return to work.

If currently you don’t have regular social events, or you do but they are poorly attended, you have an opportunity to improve the performance of your team.  What’s more, this is a rather pleasant way to improve performance, so why not instigate a focus on the social side of business?