If, like me, you are little perplexed by people who prod, poke and distort their bodies rather than

settle for what the Divine Potter gave them, you will have noticed that eyebrows seem to be a major area of focus these days.  Some people remove them then paint McDonald’s like arches on their foreheads, others shave them off then get identical replacements tattooed back on while many overpaint them with huge wedges of black make up.  So why all this obsession with eyebrows?  Although this appears to be a modern trend, like so many human behaviours this is rooted in evolution and dates back thousands of years.

Our current human form is the result of millions of years of evolution, so all our physical attributes have a function or reason for being there.  Eyebrows are no exception.  Their purpose is to protect our eyes.  They catch the sweat from our brow and prevent it from carrying dirt into our eyes.  This way we avoid eye infections.  So, if they are so important, why do some people shave or pluck them off?  Forgive me if you did GCSE History in the UK, as I will be going over old ground here.  Ancient Egyptian well-to-do ladies had rather charmed lives.  They didn’t have to work out in the fields or look after their children, they had staff to do this for them.  In fact they never really needed to break a sweat at all, and there is the key.  Incase the general populous was not aware of their elite status, these ladies would shave off their eyebrows to indicate to the world that they didn’t sweat and toil.  So groomed or removed eyebrows became an indication of social status.  So this simply became a learned behaviour, if you wanted to look more important or successful you messed around with your eyebrows; right up to the point where today’s teenagers will wax their brows away or take a pair of hair clippers to sculpt them, without any knowledge of the history behind this.

Our behaviour today is almost always rooted in an ancient need to survive.

Incidentally, the Egyptian ladies found that even sitting around doing nothing all day didn’t remove the body’s desire for homeostasis, as such they would sweat anyway.  Wishing to avoid eye infections but not wishing to sport something as working class as normal eyebrows, the Egyptian ladies took to applying bacteria killing copper around the eyes.  This resulted in a green hue on the eyelids and around the eyes.  So now we also see why many women wear eyeshadow and why, to this day, green is still the most popular colour. 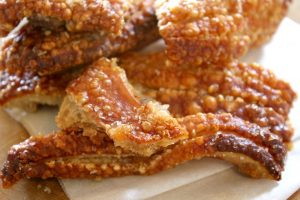 So many of our modern behaviours can be traced back to a time when life was very different to today, and as such, many of these modern behaviours can now be counter-productive as they no longer provide an evolutionary advantage in our modern world.  Let’s take a simple example.  Nomadic humans in prehistoric times would often go days or weeks without food.  Without a Tesco Metro on each corner, food was a scarce commodity and often involved chasing a quadrupedal mammal for several hours before dinner.  This being the case, humans who preferred high calorie food such as fat and sugars tended to do better as they would rapidly replace their spent energy and store much of what they eat as fat for future survival.  Today a love of pork crackling followed by Ben and Jerry’s is associated with early onset heart disease, but sadly evolution hasn’t caught up with our understanding of human physiology and will take many, many generations to do so.  So we have an innate human behaviour that does little to aid our survival.

In addition to our love of unhealthy foods, we have other ancient human behaviours that can get us into trouble.  ‘Ah, he’s going to talk about Amygdala centric behaviour isn’t he?’ I hear you think.  You are right, although a slightly controversial subject in behavioural science circles, we have to all agree that there is something in it.  Google the term and you can read many papers on the subject.  You may well have been on a training course where someone has talked about your ancient reptile brain.  Well this is what we are talking about here.

You are an intelligent person, you are not a criminal.

The paradigm is familiar to us all.  Someone cuts you up on a roundabout as they misunderstand the lane filtering system.  You hit the accelerator pedal and chase them down, leaning out of the window shouting obscenities.  You stop at the lights and see them in the next lane.  You get out of the car, engine running and kids strapped in the back.  You then open the door of the offending vehicle and attempt to extract the driver from their seat.  You are now in a game of Grand Theft Auto and a policeman is about to come and summarily execute you.  Why behave in such a disproportionate manner?  You are an intelligent person, you are not a criminal.  You know that someone making an innocent mistake whilst driving does not warrant a criminal record for you.  No good can come of this behaviour, but you do it anyway.

The theory goes that we become Amygdala centric.  Some say that we switch off our modern, sophisticated brain and revert to using only our ‘reptile’ brain.  The brain early humans used for survival.  This is where some controversy creeps in as scientific research struggles to support the notion that we use only one section of our brain at a given time.  The good news is, we don’t need to prove or disprove that humans are capable of switching off entire sections of their brain, we can still learn from this theory based on the vast quantities of empirical evidence that exists.  So forget about the reptile brain or the triune brain and focus on what we know.  People do see the red mist, this is a fact.  Phrases like “He was behaving like a man possessed”, “There was no talking to her, she just went off on one!” arise from our observation of this type of behaviour.  Certain circumstances give rise to us switching off logic and behaving in an almost binary way.  Just like shovelling fatty food into our mouths was once a ticket to evolutionary fitness, switching off our logic was also a key to survival.  When physically attacked, our best defence was always to run or fight.  This is a pretty binary choice, if you run away you are in with a chance of survival.  If you stay and fight, you may turn out to be stronger than your attacker and again survival is the outcome.  If you stop to have a think and then try and present a win-win solution to your attacker where you both survive and establish a compromise agreement that delivers a little of what you both want, you probably wont get the chance to pass your genes to the next generation.  So this binary mode of operation was a pretty useful human feature.  As evolution takes a long time to catch up with societal change, we are kind of stuck with it. 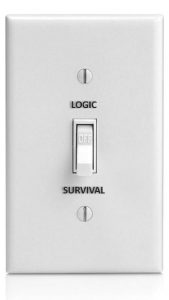 The bad news is, in the workplace, this mode of behaviour is of no use to us whatsoever.  It can only ever be damaging, and a 5 minute outburst can often take years to undo, if you can undo it at all.  Yet we are programmed to behave in this way and once you go there, you can’t come back until you are done. In other words, once you flick that switch, you can’t readily decide to switch back to logical, intelligent you.  So the key is, don’t flick your switch in the first place.  This is something we can do.  We can avoid entering this mode in the first place.  We just need to see the warning signs and know our triggers.  By doing this we can embrace the situation, let the emotion pass through us and embrace the positive outcome that we can deliver.  Take this as your prize rather than the pyrrhic victory of punching someone to the ground, or giving someone in the office the Alec Fergusson style hairdryer treatment.

Right now you have taken control of a situation that hasn’t even happened yet.  Doesn’t that feel good?

So look back at situations that have made you behave this way.  It doesn’t always result in physical violence or even verbal sparring.  Sometimes you may just score points from someone by making them look stupid, or proving that you were right from the outset in an Alan Partridge style outburst.  This behaviour is as illogical and as damaging to your reputation as a red faced rant.  Look at when you may have been guilty of this, look at what took you there and choose today an alternative behaviour that would result in a better outcome for you.  Right now you have taken control of a situation that hasn’t even happened yet.  Doesn’t that feel good?  I promise if you do this and let the whole scenario play out, you will feel a whole lot better at the end of it.  That very temporary relief you get from giving someone a piece of your mind or flipping the bird to a fellow road user is nothing compared to the sustained performance you can get from controlling yourself and these potentially negative situations from the outset.

Save your fight or flight mode for when someone breaks into your house and threatens your family, don’t take it to work with you.